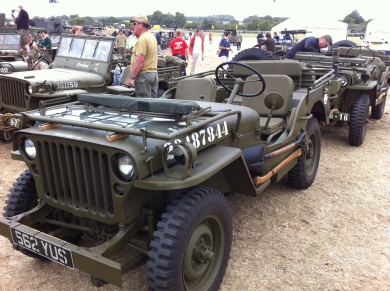 The Willys Jeep was produced in the 1940s as a tender request for a vehicle by the US Army Quatermaster. The companies that tendered were requied to produce a prototype of a four wheel drive vehicale weighing less than 1300 pounds with in an incredible 49 days. The American Bantum Car and Willys oveland Inc were the only two of the 135 invited companies to respond and 47 days after Bantum delivered their prototype to the Army for testing. but du to the size of the Order the Army gave more time to Willys  and Ford  to come up with vehicle the same at Bantum. the contract was awarded to Willys which started production and later Ford was contracted under license from Willys to start production as well.

The Willys and Ford Jeeps continued through the 1940s to the end of WW2 when the French Army was also given license to start production to use as its vehicle known as the Hotchkiss Jeeps. At the end of the war all the jeeps in service were taken in to the French workshops and stripped and reasembled using Ford, Willys and Hotchkiss parts. So if you ever find a Jeep with all three parts Ford Willys and Hotchkiss, then this is a good sign it has been in service since the 40s. The French Army has stoped producing the Jeep now so they are becoming hard to find as a restoration.

The good thing is there are many sites around the world producing new repro parts for the Willys and Ford Jeeps and in some cases we can still get the original NOS parts, basically you could build a compelet jeep now from all the parts available except the engine, this is the only parts that has not been re-produced due to costs. We have set up partners all over the world for the supply of Willys and Ford jeeps for restoration or ready to go.

We can supply you with a Willys or Ford Jeep to your brief and in most cases to your project budget, we can also build you one ground up fully restored. Check out our stock or call for updates as we have jeeps ariving all the time.

We are located at:

If you have any queries or wish to discuss your project or brief us on what jeep you need, please contact us:

Get social with us.